Photo by Rosanna McNamara of Kai and Philip ​filmed by Gemma Riggs at IoPPN in May 2018, in a short film that will be shown at Bush House October-December 2018.
EUNETHYDIS refers to the European Network of Hyperactivity Disorders. This is a network of scientists (animal and human research), clinicians and clinical researchers, cardiologists, pharmacologists and neuroscientists dedicated to the study and treatment of children with Attention Deficit Hyperactivity Disorder (ADHD) or Hyperkinesis. EUNETHYDIS has 40 full members and 120 junior members throughout the EU countries and has held an annual meeting for the last 20 years. Its 5th Conference, co-curated by Professor Philip Asherson and Professor David Coghill of Melbourne Universirty, welcomed 500 health researchers and professionals to Edinburgh, Scotland. ​ #MagicCarpet had 3 forms of presence at EUNETHYDIS: I) Monday 24th September: Plenary 2: performance-lecture Unreasonable Adjustments in the section The Art of ADHD chaired by Kai  II) Tuesday 25th SeptemberRoundtable discussion: Perceptions of ADHD best friend or worst enemy  III) Exhibition throughout the conference: 23rd – 26th September. See images (by Kai and others) and information below, 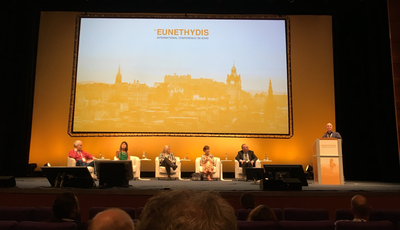 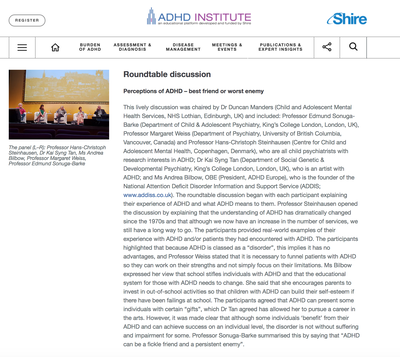 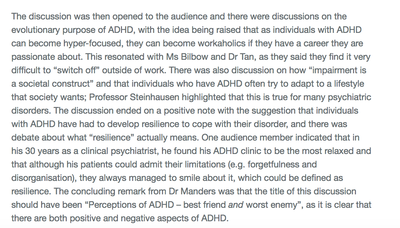 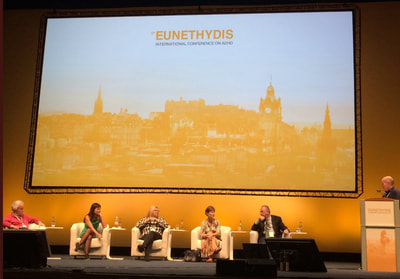 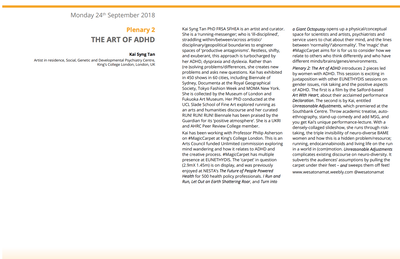 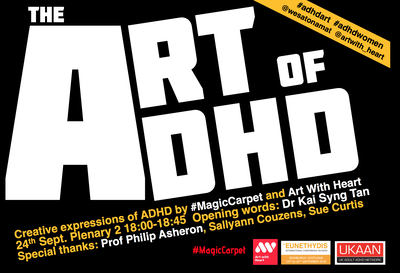 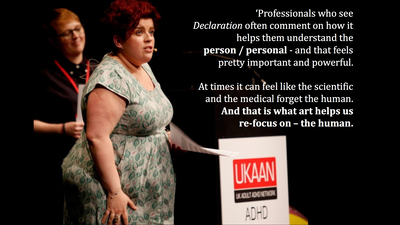 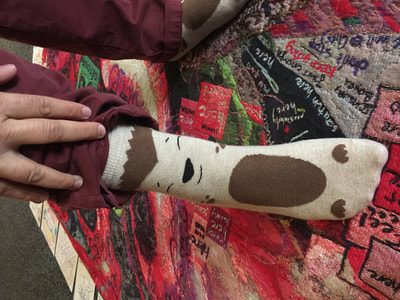 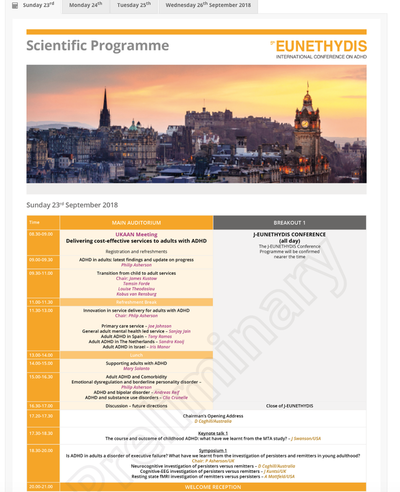 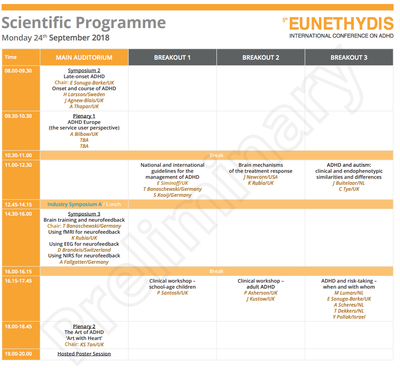 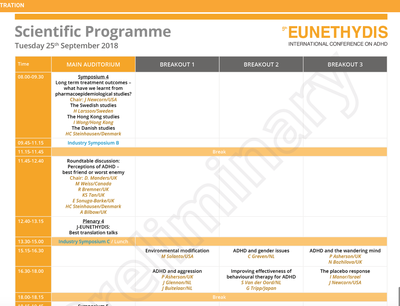 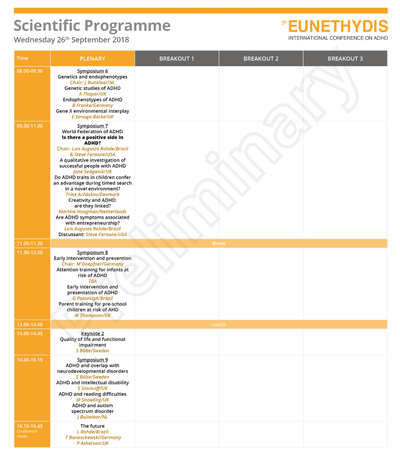 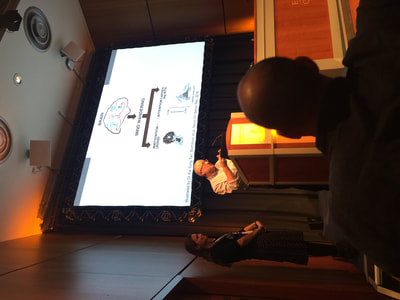 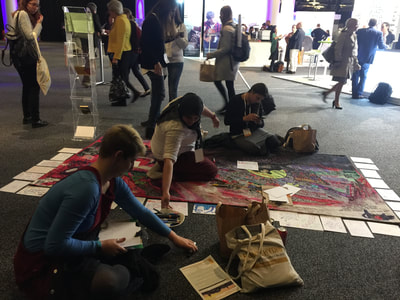 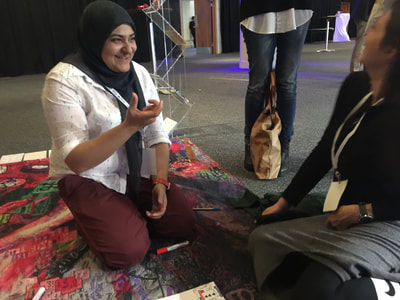 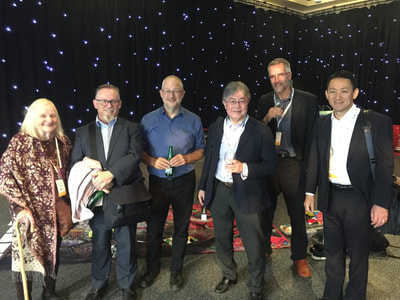 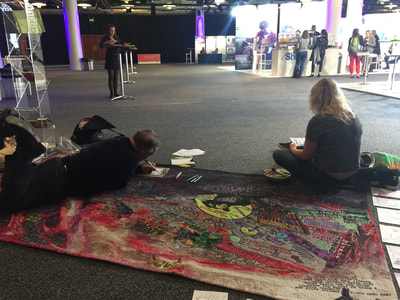 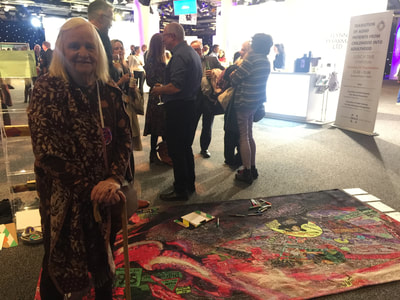 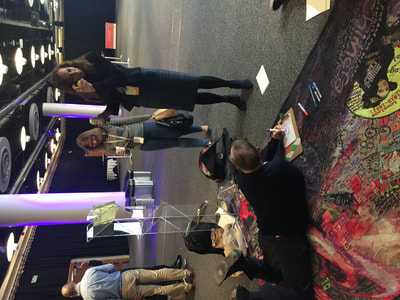 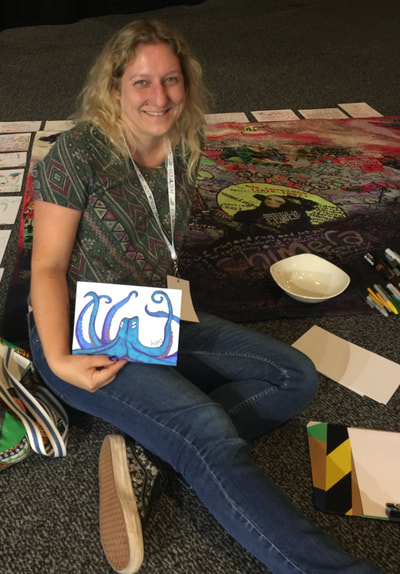 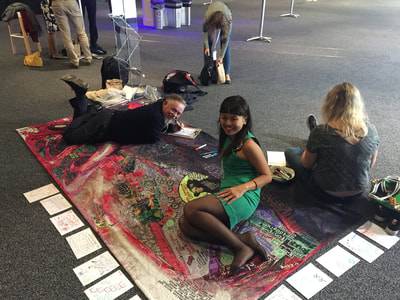 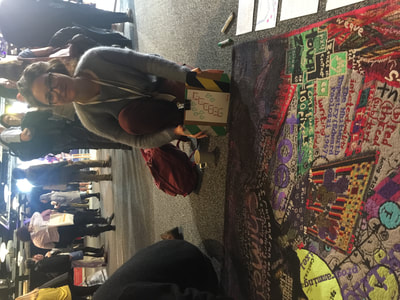 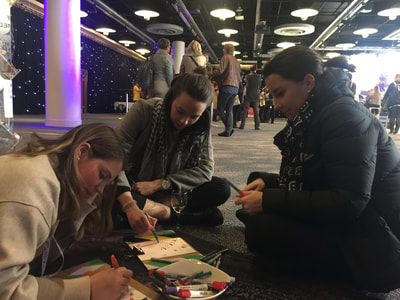 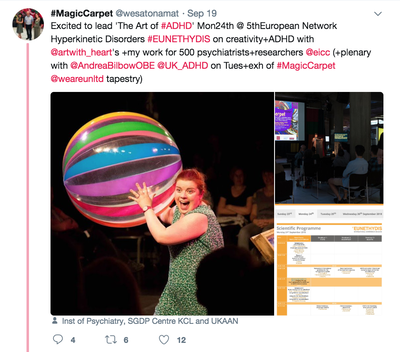 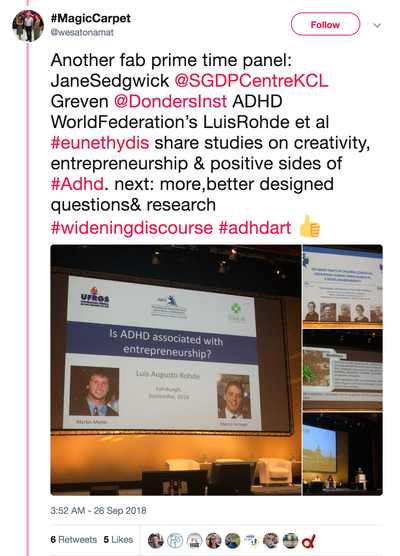 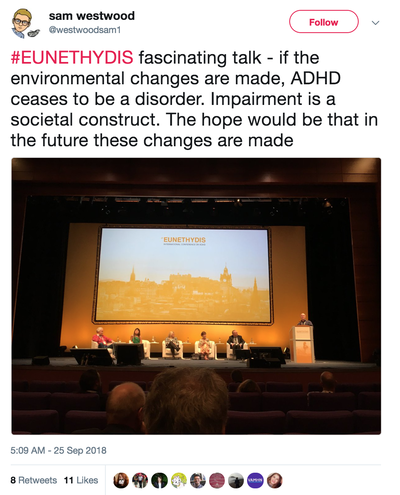 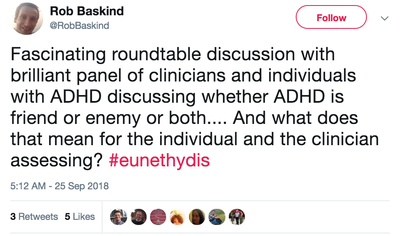 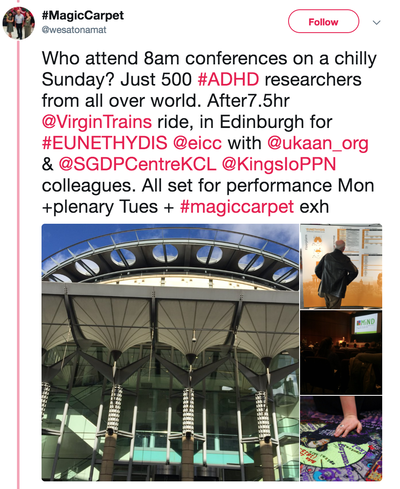 Kai has been working with Professor Philip Asherson on #MagicCarpet, an Arts Council funded Unlimited commission on mind wandering at King’s College London. #MagicCarpet has 3 form of presence at EUNETHYDIS. The ‘carpet’ in question (2.9mX 1.45m) will be on display throughout the conference. Entitled I Run and Run, Let Out an Earth Shattering Roar, and Turn into a Giant Octopussy, this is a key outcome of her residency at King’s, where she learns about the science of ADHD. The work opens up a physical/conceptual space for scientists and artists, psychiatrists and service users, ADHD-sceptics with health providers to chat about their mind wandering and the lines between ‘normality’/‘abnormality’. The tapestry has been enjoyed at NESTA’s The Future of People Powered Health for 500 health policy professionals, and will next be exhibited at Bush House in London. The ‘magic’ that #MagicCarpet aims for is for us to raise questions, learn
from and challenge one another and irritate existing assumptions about how we relate to the world, self and one another. On 24th September, Kai chairs Plenary 2: The Art of ADHD and introduces 2 pieces led by two women with ADHD. This session is exciting in consideration with other panels at EUNETHYDIS such as those on gender issues, risk taking and the positive side of ADHD. The first work is a film by the Salford-based Art With Heart, about their acclaimed performance Declaration. The second is by Kai, entitled Unreasonable Adjustments. Throw academic treatise, auto-ethnography, cine-essay, stand-up comedy and lumps of salt and MSG together, and you get Kai’s unique performance-lecture, a format that she has cultivated over the years and which has been enjoyed from the Biennale of Sydney (2006), through to American Association of Geographers’ Meeting in Chicago (2015). This performance-lecture premiered at the Unlimited Festival Southbank Centre in September. Through a densely-collaged slideshow, Kai scampers through a dizzying/delicious assortment of drawings, snapshots and concepts, touching on hyperactivity, risk-taking, the triple invisibility of neuro-diverse BAME women and how this is a hidden problem/resource; running, endocannabinoids and living life on the run in a world in (com)motion and desire/death/discipline. Unreasonable Adjustments is a provocation to widen the discourse on neuro-diversity and how the arts can complicate the discourse, at once subverting the audiences’ expectations by pulling the carpet under their feet, but also (hopefully) sweeping them off feet.

On the 25th, Kai also participates in a roundtable discussion on perceptions of ADHD in a panel that includes comedian Rory Bremner.

ABOUT KAI:
Kai Syng Tan PhD FRAS SFHEA is an artist and curator. She pictures herself as a running-messenger who is ‘ill-disciplined’ (all puns intended), straddling within/between/across artistic, disciplinary and geopolitical boundaries to engineer spaces of ‘productive antagonisms’. Characterised by agility, exuberance, hyperactivity and a refusal to be pinned down, this approach is turbocharged by her ADHD, dyspraxia and dyslexia. Instead of (re)solving problems/differences, she creates new problems and asks new questions. Kai has exhibited in 450 shows in 60 cities, including Biennale of Sydney, Documenta at the Royal Geographical Society, Tokyo Fashion Week and MOMA New York. She is collected by the Museum of London and Fukuoka Art Museum. Her PhD conducted at the UCL Slade School of Fine Art explored running as an arts and humanities discourse and her curated RUN! RUN! RUN! Biennale has been praised by the Guardian for its ‘positive atmosphere’. She is a UKRI and AHRC Peer Review College member.